Within commodities, we are more constructive on oil than base metals. Oil fields tend to have a natural rate of depletion so supply is constantly coming down while demand has stayed relatively robust. The supply-demand imbalance is correcting itself which is why oil prices have gone up to almost $70. I am not a believer in $100-plus oil price, but you don’t need it in order to make money for a lot of the oil companies that we invest in. The best oil opportunities in the world are in the US because of shale fracking. That’s where we tend to be exposed. Consumer staples and physical property are trades that are past their prime. I would avoid owning high-priced consumer goods companies like multinationals etc in India and abroad. Even though they are perceived to be high quality as they are not necessarily a good investment bargain. Going forward, what you really want to be long on is intellectual property (IP). An IP does not have to manifest itself just in the technology sector. Shale fracking is a manifestation of applying IP to energy markets.


On a global basis, most markets look over-valued and India is no exception. It is now a stock picker’s market, so you have to pick your spots. In India, we are constructive on financials. Another interesting emerging area is telecommunications. Globally, telecom is an unloved sector. Most of the revenues and earnings streams come from wireless, which I would argue is the new consumer staple. You get not just stable earnings and recurring revenue streams, which are non-cyclical, but you get high dividend yields. In India, it is a bit premature because the industry is going through consolidation, so opportunities will emerge. I don’t run a dedicated EM strategy and in my international strategy, we don’t own any Indian stocks, but that’s really because of the universe of options that we have all over the world. We do feel India’s valuations are stretched and if there is better risk-reward elsewhere, that’s where we go. But I do believe in the long-term prospects for this country.


If there was a singular investment that I would consider, HDFC would probably be top of the list. It is an institution that has a long runway for growth because of the Indian demographics. In any financial institution I look for an ability to be very focused on the long-term and not take an undue risk. HDFC is renowned for that. I have always felt that the HDFC management team makes the right trade-offs. I get quality growth with quality risk


People are too complacent. Complacency is manifesting itself in low volatility and low liquidity. That’s a risk people are not paying attention to. In the corporate bond market in the US, especially in the high-yield market, the spreads are very tight. Actually if you try to go and sell in this market, there are no buyers for it because the spreads are too tight, which tells you it is a fake market. There are no real transactions behind it supporting those price points. The thing to track in this arena of low volatility, high complacency and crowded trades, is what the high yield market in the US does. Spreads start blowing out, that’s your lead indicator that people’s appetite for risk has reached a peak. We are at the peak now. You could scale a new peak; but if it reverses, then you watch out because the trough is far away from the peak.


When fiscal policy becomes more stimulative, monetary policy can afford to take a backseat. People are expecting three rate hikes and that’s what they are pricing in. But as with all these things it is data dependent. I am not convinced that inflation is at hand and that we have vanquished deflation. In Europe, Germany, Switzerland and Japan we have negative interest rates. We have not gotten out of the woods yet in terms of raising rates everywhere in the world. It is hard to see interest rates spiking but the gradual movements that we have seen can be digested by the equity markets but I don’t know if they can be digested by the bond market and especially the credit markets.


A lot of things going on in the world are dollar positive whether it is the Fed move of raising rates or the fiscal stimulus. The dollar actually has been weakening for the better part of 12- 17 months. The dollar seems to have resumed its uptrend after a hiatus. People will also begin to appreciate that the US is going to be an exporter of oil. I would not bet against the dollar. What would make me change my view is the US high-yield market because it is very concentrated in the US. If that market gets affected that can become a very serious issue.


It is a high amount of NPLs to reckon with, but on a relative basis it is actually not that large. Other countries have way more problems than India does. In India, they are acknowledging the issue and addressing it whereas in a lot of other countries they are sweeping it under the carpet. In India, there are a lot of vibrant private sector banks who can carry on the baton while the public sector banks try to fix these issues. The entire economy doesn’t suffer. 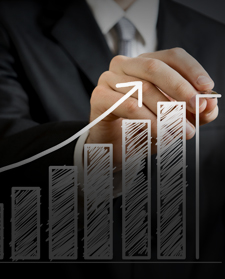