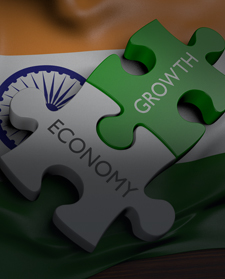 We have had exceptionally strong data in China and our own indicators of global growth showed that the global cycle is picking up. More people are becoming more confident about global growth. In our interaction with investors, we are not seeing signs of excessive optimism. In fact, we have had this very strong recovery markets especially with the S&P hitting a new all-time high last night. Yet retail investors have been net sellers to a large degree -- nearly $100 billion in the US this year. Closer home, in India, retail investors have been quite cautious and only just recently have begun to come back to the market. Overall, our sense is that the signs of euphoria that show up when a market peaks are still not objectively in abundance.


Our expectation is that earnings will pick up this year and next. For the broader index, we are looking at about 16% growth this year and 14% in 2020. That would be 15% on average and below the consensus figure of 20%. We still think the consensus may be a little bit optimistic but the key point we are making is that the absolute level of growth which is likely to manifest will actually be the best of any of the 11 markets that we cover across the Asia Pacific region.


In part, it is because of at least this year, there is an easy base of comparison because last year there were lots of write offs in the banking sector. In part, it is going to be something of an improvement in the economy and maybe the flow-through effect of an easy monetary policy which typically is better for growth and also helps earnings.


We are constructive and hopeful that things can improve. That sounds like overly optimistic thinking because I have heard that so many times the past few years. We do keep a close track on the quarterly earnings and the one encouraging recent data point is that for the recent earnings reporting season -- which will be the fourth quarter of calendar year and the third quarter of India’s fiscal year, if we look at the actual results relative to the consensus forecasts, it was the best quarter in terms of beats versus misses that we have seen in the last 16 quarters.


We have done some research and I emphasise that we are not taking any view on the outcome of the election, that is not our job. What we can do is observe and analyse how has the market traded elections in the past. The key point from the analysis that we have done is if you look at the last six election cycles, the market typically rallies into the election and then stabilises after that and sometimes about two, three months after the election, there is a little bit of profit taking.


We try to make sure we have a pulse on the foreign investors view on India -- both through objective data looking at mutual fund positioning and fund flows into Indian equity market which is accessible to everybody. It is published by the stock exchange and then we complement that with some empirical anecdotal evidence from the many conversations that we have with investors.


I can share a few things; first, the empirical data shows that foreign investors have been quite overweight India for many years and gradually brought that back to just slightly above neutral. They were going from 600 bps overweight -- which is a lot -- to pretty much neutral or just 100 bps overweight. Foreigners have really brought their very bullish India view back which means that they have got a much better base to re-engage in the market if they begin to become more constructive.


Second, as we saw a significant foreign selling last year to the tune of $5-6 billion and from a very low base, they have begun to come back. That is reflective of an expectation that the broader investment climate has improved. Either way, it is better growth. Some signs of specific-to-India improvement at the macro and at the micro level help catalyse the foreign buying.


The third point I would make is again anecdotal. I have seen many investors in different locations. After China, which is a hot topic because of the size of the market and how well it has done this year, India is number two. People want to engage on that and there are lots of questions about the fundamental macro backdrop, the earnings question which you have correctly asked and then how much of that is already priced in.


India is one of the most rapidly growing economies under structural five-year view, larger because of core dynamics, growing labour force with rising total factor productivity potential for capital investment. The core ingredients of economic growth are still there in abundance as long as policy is supportive and that should manifest in terms of a good backdrop of growth. Our sense is that India still has a very good trend in return opportunity and it is the level of or the magnitude of upside I am talking about.