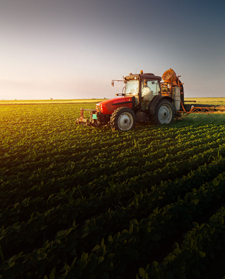 Tractor growth: It has been a very good year and as we look at the next year on back of two very good years, the normal growth in the tractor industry over a long-term always has been 8-10 percent. So starting off the year to project a growth much higher than 8-10 percent will be difficult but we will wait to see how the monsoon forecast comes up and then they will have to look whether industry will surprise or not. So right now we are going in with a view that the growth will be in a normal range, which is as low as 6 if the monsoon is not good and as high as 10 if the monsoon is good.


EBITDA: If you look at our performance during this year, up to Q3 financial year 2018, we have managed our margins in spite of all the commodity price increases. Obviously when volume goes up, it does help us to get good EBITDA level because our fixed cost gets distributed over a larger volume. So we have done quite okay up to now.


Risk that there could be some decline in overall volumes: I would be very surprised if that happens because we are going in to the year with almost no headwinds. The agriculture output has been good, the MSP prices have been good, the government’s focus on agricultural and rural development is absolutely very high and very first indication of monsoon also is positive. Goods and services tax (GST) is all settled in. So I don’t see any reason why we should have a negative growth during this year. I should also say that this year, we are going to end up as an industry as the highest volume ever – 8-10 percent higher than the previous high which was in FY13.


Utility vehicles space : For the country, SUV growth has been phenomenal and the last two years, SUVs have significantly outperformed the passenger car segment and today it constitutes 28-29 percent of the total passenger vehicle volume comes from SUV which is perhaps amongst the highest in the world of any major auto market. For Mahindra, we have two major launches coming up and also G4 Rexton from Ssangyong coming in as a high-end SUV and therefore we have three launches that will happen of new products during this year. I would like to say with reasonable confidence that we should see a good volume growth for M&M and SUV segment on the back of these two launches.


On electric vehicles : I cannot imagine right now getting the same kind of margin as we get in other vehicles but we should start making small profit fairly soon. Lot of the selling of electric vehicles will happen on tender basis. There is a severe competition on tender basis, so I think we are over the situation of having to have a variable cost loss and as we move forward, I would


expect to start seeing little bit – various margin coming into variable cost level and as volumes go up then we would see overall profitability.


In terms of margins: If you look at our historical margin levels, we have more or less managed to maintain our margin sometimes little bit on improvement that we are able to get. I would say that we are doing a reasonably good in terms of margins in spite of several things that happened during last year.

Do not judge this market by its PE ratio

There is greater value for the patient investor

Demonetisation: Topline growth of India Inc seen at 6-8% in FY17