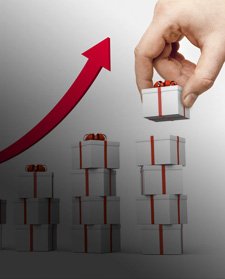 Here’s a happy thought – should you have taken that holiday next week? We find that taking holidays can be a zero sum transaction too. We compared the Christmas week performance of the Sensex against the preceding four week average for the last sixteen years. Interestingly, the performance of the benchmark equity index in twelve out of those sixteen years has been better than its near-term history. In five out of those 12 outperformance years, there was a positive U turn in performance (see 2001, 2006, 2007, 2009 and 2015 in chart below). Only 2011 ended badly. Thin liquidity and a good mood, since it’s the season of hope, could explain this positive show. Let’s hope you planned a fun holiday so that you don’t feel bad that you were not there when Santa came bearing gifts.

Next year, once you’ve been demonetized (after that lovely holiday) you will be welcomed back to several known unknowns – December PMIs, how much black money got extinguished, when will UP elections be held, Donald Trump’s policy outline, the all-important union budget, the RBI’s policy review, the Fed’s next action, OPECs fidelity etc. That’s a lot of moving parts, phew! Fortunately, we have our eyes focused on these events and will keep you updated on how best to dodge, duck, dive and jump with your portfolio.

The next edition of EOW will be published in the New Year on 6th January. Here’s wishing you a merry Christmas (or Good Governance day! as proposed by the government) and a prosperous 2017.