Earnings will be much better from here on 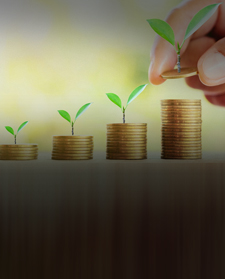 Earnings growth look set for a multi-year revival at least till they reach nominal GDP growth. The initial bounce back is expected to be stronger while for 2018-19 he expects 18-20%growth.


Nifty earnings growth for the last 8-9 years has been 4% and for a long period of time corporate earnings have been below GDP.


Growth in earnings will be led, firstly as demonetization and GST both are done with, secondly global growth has picked up and thirdly on account of run up to elections.


Earnings of Nifty companies have a linkage to the world growth rather than that of India.

For Nifty companies, 40-50% of their earnings comes from outside India in sectors such as energy, metals, IT and pharma. World growth has picked up and in the last 18 months we are seeing synchronised recovery in global growth where major regions like the US, Europe, Japan and China are at trend or above trend.


In India, political spending in the run up to the elections between May 2018 to June 2019, is going to go up. Elections act as stimulus for the economy and you see improvement in demand of cement, steel and electricity four to six months before elections.

Sectors like pharma and telecom have had sector specific issues but expect earnings to improve significantly in 2018-19 and 2019-20.


It’s a market of middling attractiveness. If cumulative earnings growth of 50% happens in 3 years, which is possible, and PE reverts to the long-term mean of 15-17x, then you will still get low-double digit compounding for 3 years, which is a good solid return. Especially so in the context that major other alternative asset classes still look fragile.


Structurally India is moving to a lower inflation trajectory. In last 20 years average CPI has been between 6% and 8%. With government targeting inflation of 4%, a return of low-teens is not bad.


The PE may structurally move higher if inflation consistently stays in the 2-6% band as predicted. If we don’t see CPI going to 8-10% as we saw earlier, the PE will bump up a bit. If risk-free rate is down, then there is merit in saying valuations will be higher than last 20-year average.


Broadly, there is more value in the large-cap stocks. However, there are certain companies and sectors where there is still relative value in mid-caps.


In cement, large- caps are less attractive than midcaps because the operating leverage that comes from being a larger company is very limited in cement beyond the first 10 million tonnes. Cost of raw material is same and you could get a mid-cap company at $50-60 a tonne versus paying $140 for a large cap.


A lot of business parameters like CASA and several others are similar for the bigger banks, be it private or public. Credit calls are a differentiator. The recent developments will be positive in terms of creating a strong credit culture in India.


Near-term, there will be challenges for PSU banks as there will be more provisioning required and their capital situation is not comfortable. Some of them will need to raise capital and that is a challenge.


From 1991-2015, IT services exports plus remittances went from 0% to 8% of GDP. That was a big driver of the Indian economy. However, in the last three years it has plateaued out and marginally dipped. In 2016 and early 2017, there was a global slowdown. However, in this bounce-back of global trade over the last 4-5 quarters, India’s exports should grow at 1.5-2x the way developed countries are growing. But, Indian exports have not picked up, and that is my concern