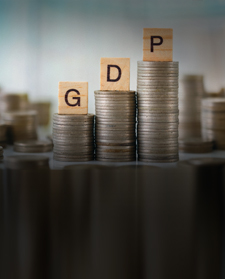 FICCI's Economic Outlook Survey projects the quarterly GDP growth forecast for Q4 2017-18 at 7.1%; taking the full year growth estimate for 2017-18 to 6.6%. The survey was conducted during April-May2018 and included economists from Industry, banking and financial services sector.


Agriculture: The median growth forecast for agriculture and allied activities has been put at 3.2% for 2018-19. The Indian Meteorological Department (IMD) has predicted a normal monsoon which bodes well for agricultural production during the year.


Industry and Service Sector: Industry and services sector are expected to grow by 6.7% and 8.4% respectively in 2018-19.


Some concerns are visible on external front with median current account deficit forecast pegged at 2.1% of GDP for 2018-19. The surge in oil prices has emerged as a major risk factor and can weigh down heavy on Indias external position and overall growth prospects. The weakening Rupee is further adding strain on the imports. In fact, the economists felt that the Rupee might continue to remain under pressure during the remaining part of the year. Foreign capital inflows are expected to face risks from tighter global liquidity conditions, introduction of long term capital gain tax and from other global financial developments such as correction in global stock markets and rise in US treasury yields.


The economists also shared their views on rising protectionist policies by some of the leading economies and its impact on India. They unanimously felt that the brewing trade war can impact India indirectly, if not directly, as the country is deeply integrated with global economy. The trade related tensions will further exacerbate geopolitical strains and could lead to a slowdown in growth of world trade. The economists believed that protectionist measures could undermine the multilateral trading system governed by WTO rules.


It was opined that exports are likely to bear the brunt and export-oriented industries particularly MSMEs in sectors like iron and steel, machinery and metal products, chemicals and agricultural goods are likely to take a hit. There are possibilities of an unexpected interruption in the global supply chain.


Nonetheless, it was also felt that on the positive side the looming trade war has the potential to open up new avenues for India. India should focus on deeper engagement with its key trading partners to insulate itself from the impact of protectionist policies.


Furthermore, the Reserve Bank of India in its First Bi-monthly Monetary Policy announced setting up of an inter-departmental group to assess the feasibility of introducing a central bank digital currency. Given the fact that several central banks around the world are contemplating to introduce a fiat digital currency.


The economists agreed that introduction of a fiat digital currency will be a step in right direction. Citing various advantages, economists said that digital currency will provide an easy and efficient way for instant global electronic transactions, prevent counterfeiting and reduce printing and administrative costs substantially. It would also benefit by bringing about wider financial inclusion, enhancing market stability and providing for better record keeping and monitoring of transactions.


However, the economists also cautioned that even though the concept of digital currency is promising on several fronts, its introduction requires detailed discussion. They felt that a fiat digital currency could pose a threat to privacy and security concerns need to be safeguarded first. They called for careful consideration and discussions before implementing any such arrangement.


The government has set up a high-level task force to chart out a roadmap towards making India a USD 5 trillion economy over the next 7-8 years. In this context, the economists were asked to share their prognosis on ways government can adapt to support and promote rapid growth in the manufacturing sector.


Most economists agreed that a vibrant manufacturing sector is needed to achieve impressive growth in GDP. It was felt that the sector, at present, is grappling with issues related to competitiveness which is contributing to lower exports as well as overall growth. While the government has taken steps to improve the business environment and removed several bottlenecks, the economists participating in the survey felt that a lot more needs to be done to increase the share of manufacturing in GDP.


They opined that the government must stand up to the challenge of carrying out the difficult reforms, especially those related to the factor market (land and labor). Further, timely implementation of proposed reforms in the infrastructure and logistics space like the Bharatmala Project and power sector must be ensured to improve competitiveness of the Indian manufacturing sector.


A special focus must be provided to small and medium enterprises as they form the backbone of Indias manufacturing sector. The SMEs continue to be real job creators in Indias economy. Since they form such an important part of our countrys industrial structure, the economists suggested that processes for small and medium enterprises and start-ups must be further simplified. The participants also called for consistency in long term policy formulations to bring about stability which is conducive for investments.


Furthermore, the economists pointed out that there is an urgent need for continuous supply of aptly skilled workforce for manufacturing output to expand. This becomes even more important when the world is looking at Industry 4.0 which is expected to open newer opportunities for those with higher value-added skills.


In addition, economists believe that supply chain agility is crucial to improve the efficiency of the manufacturing ecosystem and this is where the governments spending on infrastructure to improve forward and backward linkages will play a significant role.


Lastly, it was suggested that manufacturing units must ensure world class quality in the products they produce. Economists recommended a zero-tolerance approach to be followed to guarantee process discipline. This will go a long way in promoting India as a global manufacturing hub.

Monsoon Impact on the Market - AxisDirect